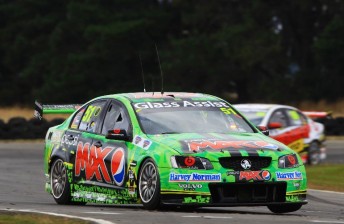 David Russell has declared himself pleased with the opening three practice sessions for the Tasmania Challenge, despite ending the day just 25th fastest.

A regular in the Dunlop Series for Kelly Racing’s Dreamtime Racing outfit, Russell has replaced Greg Murphy in the #51 Pepsi Max Crew Commodore this weekend after the Kiwi withdrew from the event with a back injury.

Russell turned a total of 52 laps of the Symmons Plains circuit across the 80 minutes of Friday track time, setting a best of 0:52.3537 in a day dominated by tyre condition.

Russell was one of just seven drivers not to improve on his best Practice 2 lap in the final session, and says he’s looking forward to sampling new tyres for the first time tomorrow.

“I was really happy with the pace that we had in third practice, because I was punching out some pretty good times that were right on the race pace for the quality of tyre that we had,” said Russell.

“I think that once we put some better rubber on it’ll be a much better car.”

Russell started the day by setting the sixth fastest time in the 30 minute lower 50% session, which he used to acclimatise himself to the car and circuit.

“The first session today was more about trying to get used to where all the switches and everything are in the car,” he said.

“It was a good session to get out of the way, bed some brakes in, feel comfortable, get used to the balance of the car and reacquaint myself with the Symmons Plains circuit.

“I didn’t want to go crazy making too many adjustments to the car, as I needed to adapt to the way it was set-up.”

Murphy meanwhile has been released from hospital following a successful operation on his back, and is confident of returning to the championship at Hamilton in three weeks time.