Big crash for Loeb in Portugal

Big crash for Loeb in Portugal 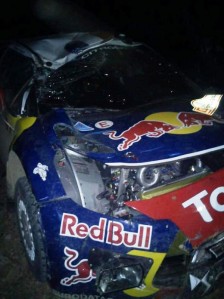 It doesn’t happen all that often, but when Sebastien Loeb has a crash in the World Rally Championship it is a big one.

Loeb’s Vodafone Rally de Portugal came to a sudden halt on the third stage of the event when he rolled his Citroen DS3 WRC.

The Frenchman was running second on the road to team-mate Mikko Hirvonen, and third overall, when the accident occurred in the darkness of the 14.29km Santa Clara stage.

“The pace note was good, but he didn’t follow the indication, just before the top the road was going a little bit to the left and we think he was looking more to the road and he didn’t follow the note. Sebastien said the impact was not heavy. We don’t know how many times the car rolled, but enough to make sure it won’t start tomorrow.

“The cage was damaged on the top. Sometimes this can happen if the first roll is heavy, but we don’t know. Anyway, the cage is bent. This can happen, it’s the rally. We still have one car and we try to take maximum points with Mikko [Hirvonen] and try to be leading at the end of the rally.” 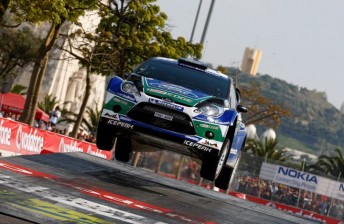 Jari-Matti Latvala out front in Portugal

Jari-Matti Latvala leads Ford team-mate Petter Solberg by 2.6 seconds at the end of the opening evening, with Hirvonen five seconds off the lead.

Rain threatened throughout the night’s action, and a cloudburst soaked the early sections of the final stage shortly before Latvala and Solberg started. Having chosen to start last of the priority drivers in search of better grip on cleaner gravel tracks, the Ford duo limited the time loss to their rivals ahead, who completed the test before the rain fell.

“We didn’t expect the rain to be as strong as it was,” said Latvala.

“When it was light it wasn’t a problem, but when it became heavier the roads turned muddy. The first four kilometres were slippery and a couple of times I slide wide. Luckily it became drier later on, the grip improved and I found the confidence to push again.

“Tomorrow I need to stay calm and be sensible and clever, because there are still 400km and three days to go.” 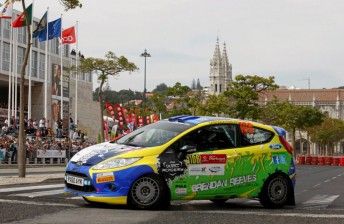 Brendan Reeves is in the fight in the WRC Academy

A very positive start for Australia’s Brendan Reeves who won the opening Lisbon Street stage in the WRC Academy segment of the event. At the end of the leg he had slipped to second, albeit just 0.5 of second behind Fredrik Ahlin (Sweden) in the Ford Fiesta R2 one-make category. Reeves is 20th overall in the event.

“I am finding being here for the second time so much better,” Reeves said.

“We are more comfortable and we know the car and the set-up we need. We also know how important it is to get to the finish. We are not pushing so hard now, just focusing on tomorrow and getting the car to the finish.

“It was great to win the opening stage and exciting that every stage so far has had a different winner. I made a few small errors tonight but all in all I am really happy with how everything is going. We just need to make sure we get it right tomorrow.”

Kiwi star Hayden Paddon heads the SWRC division for Super 2000 entries. The Skoda driver heads British driver Craig Breen by just under 25 seconds at the end of the day. He is ninth overall in the general standings.

“We did take a gamble with soft tyres which did not quite work for us as conditions were dryer than we were expecting, so we did loose some time with this,” said Padden.

“Otherwise all is going well.

“Weather will play a part as the rain looks set in for tomorrow’s stages.”

The second leg is based around Tavira, north-east of Faro. Drivers tackle two identical loops of three stages covering 132.68km.