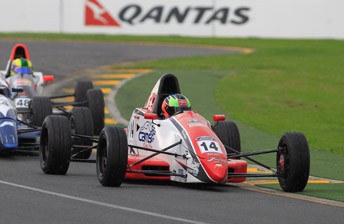 A field of just 10 Australian Formula Ford will compete at Symmons Plains this weekend, but the category’s management stresses the downturn is likely to be a one-off.

The championship, regarded as Australia’s premier breeding ground for future talent, has 10 entrants for its second round, the lowest number of entrants in recent memory.

Many Australian race drivers have used the class to launch their careers – both locally and international. The ‘who’s who’ list of ex-Formula Ford drivers includes Marcos Ambrose, Mark Webber, Garth Tander, Craig Lowndes, Jamie Whincup and Will Davison.

Long-time category administrator Margaret Hardy has attributed the disappointing size of the field to an expensive start to the year. Eighteen cars entered the opening round of the championship at the Australian Grand Prix, where entry fees are more expensive. This weekend’s second round in Tasmania incurs shipping and freight expenses.

Hardy is confident that the size of the Symmons Plains field will be the smallest field for 2012.

“It’s been an expensive start to the season and money is tight everywhere at the moment,” Hardy told Speedcafe.com.

“It’s not just us. Other categories are in the same position, and of course you can’t force people to go. Racing in Tasmania is an expensive exercise for the teams anyway, when you include the shipping and freight costs.

“The positives are that we have a top heavy field, and once we’re back on the main land for the next round, things will pick up.

“We have a lot of people this year who have elected to do selected rounds – some due to budget and others due to experience. State racing is very strong this year, especially in Victoria. There’s a lot of new young drivers, and that is a positive for the national championship next year. They are doing their learning year this year and then hopefully step up.”

Jack Le Brocq leads the Australian Formula Ford Championship after the opening round at Albert Park.

The Symmons Plains round will feature two on track sessions from each of the three days of competition, with three races held over Saturday and Sunday.