Holder racing against nature and opposition

Holder racing against nature and opposition 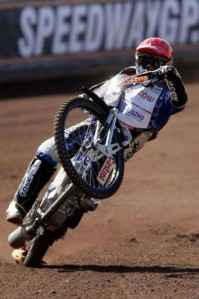 Australian World #8 Speedway Grand Prix rider, Chris Holder will be keeping one eye on his phone as well as the shale in Auckland this weekend as  his girlfriend, Sealy is due to give birth at any moment back home in Poole, England.

As soon as he finishes his first Grand Prix in the Southern Hemisphere on Saturday afternoon, the two times Grand Prix winner will charge back to the UK to be by Sealy’s side.

“I’m just hoping she can hold on until Tuesday,” said Holder in Auckland. “Every time I turned my phone on when we changed planes (on the way to NZ), I was waiting to see if there was any news. But so far so good, there’s nothing.

“Hopefully Sealy can hold out until I get back, but you never know with these things. They can come anytime! Sealy would rather wait for me to get back, so hopefully I’ll have a win at the weekend and see the little one come into the world.”

Holder told SpeedwayGP.com that it feels weird to be becoming a father – as he still thinks of himself as being much younger than his 24 years.

One thing that Holder was adamant about – should the baby be a boy – given it’s born in England, he will definitely ride Speedway for Australia

“Not a chance,” Holder laughed. “There’s not a chance in hell that he’ll be British!”