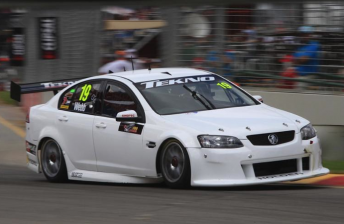 Sponsorless V8 Supercars team Tekno Autosports remains upbeat about securing major backing, even though the two-car outfit is almost certain to compete in Tasmania this weekend in two white cars.

Tekno’s Commodores, driven by team owner Jonathon Webb and Michael Patrizi, entered the opening event of the V8 Championship in Adelaide with plain white cars. The decision to compete without a livery drew criticism from V8 Supercars administrators, however, the team maintained its stance of ‘no sponsor, no stickers.’

While there is unlikely to be a change to the look of Webb and Patrizi’s entries for Symmons Plains, the newly-expanded Queensland-based team is confident that the white look will be a thing of the past in the coming events. Tekno’s commercial manager Paul Robinson says that the team will consider a one-off major sponsorship deal in Hamilton, New Zealand, unless a permanent backer is sourced before then.

Otherwise, Robinson is certain the team will have a major backer before Perth’s Barbagallo Raceway event in early May.

“We’ll be running two white cars in Tasmanian, unless something comes off in the next two days,” Robinson told Speedcafe.com.

“We’ve got quite a bit on the go at the moment, but I’d like to think that this is the last time we’ll have plain cars.

“At Hamilton, we’ll consider doing a one-off with some New Zealand companies, but from Perth onwards, we should be turning up with something there.

“There’s plenty of irons in the fire, but these things take time. Hopefully we have something concrete in the next couple of weeks.”

The Tekno team has maintained a stance of selling the naming-rights to one company, aiming to keep both cars in identical livery.

Robinson says that this remains the goal, however, there is now some flexibility.

“In an ideal world, we’d have the one brand across both cars,” he said.

“There comes to a point where you need to look at alternatives to that, but we’re trying to hold our position as far as price goes. Obviously there are commercial expectations as a business that we need to achieve.

“We’ve made some great contacts in this process, and there’s been good interest, but it takes time.

“Having three events, one after the other to start the year, has put a bit of pressure on us as well. With a bit of breathing space between New Zealand and Perth, we should be able to have something done by then.”

Webb’s Triple Eight-built Commodore has been repaired and will return to the championship in Tasmania this weekend.