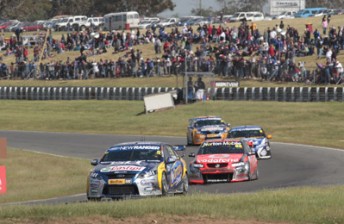 Saturday and Sunday morning practice sessions have been added to four V8 Supercars events for 2012.

In a move designed to give weekend track goers more V8 action, a 30 minute session will be held at the start of each race day at the Symmons Plains, Phillip Island, Winton and Queensland Raceway events.

The change for these four events means there will only be less V8s on track on Friday – including a later start. Just three practice sessions held, with Symmons Plains’ first V8 session not commencing until 1300 (AEST).

“It’s to do with the changes that have been made to Friday, starting our running later in the afternoon,” Edwards told Speedcafe.com.

“This has allowed us to shift some time towards Saturday and Sunday morning. Neither of them are ‘warm-ups’ – just an extra practice session.”

Teams will be permitted to use pre-marked tyres in Practice 5 (Sunday’s session).