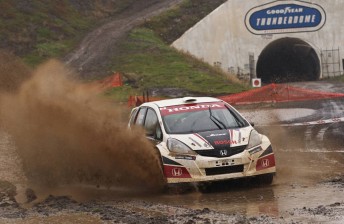 Conditions in WA are expected to be a contrast to Calder

The two-car Honda factory supported rally squad of Eli Evans and Mark Pedder will aim to show the full potential of their G2 Honda Jazz at this weekend’s second round of the Bosch Australian Rally Championship in Western Australia.

After heavy rain and muddy tracks at the opening Rally Calder event outside Melbourne, crews will face the slippery ball-bearing gravel outside Busselton in south-west WA.

“Calder for me went really well. I wanted to go there and win and that’s what we managed to do,” said Evans.

“The Quit Forest Rally will be the first major test for the Hondas. It will be the first time that either Mark or I will get to drive the car at distance. That said, I’m confident the Jazz will be hard to beat on the loose ball-bearing surface of WA. I can’t wait for the first stage on Saturday morning!,” Evans said.

“The roads there are slippery and technical, but with fast sections too. Mark came second at the Quit Forest Rally last year so we feel confident in our knowledge of the roads and conditions,” said Ryan.

Mark Pedder made his debut for the Evans Motorsport-run team at Rally Calder.

“One of the best parts of the event for us was developing a solid working relationship within the car as it was our first event together,” Pedder said.

Pedder’s co-drive, Claire Ryan, added “We were thrilled with the performance of the Jazz at its first event. Calder was quite a tricky rally with lots of tight corners and differing surfaces so it gave us a good idea of the car’s behaviour and potential. When we looked at the stage times throughout the rally we were definitely competitive in the two-wheel drive category and not too far off Eli’s times, which is a good place to be in.”

Calder Park introduced a new challenge, with the traditional forest roads held across multiple locations exchanged for the Bosch ARC’s first ever single venue round.

“In essence, Rally Calder was a stadium event which means short, technical stages repeated several times. The Jazz was incredibly nimble but we obviously struggled for traction in the muddy conditions,” said Pedder.

The Quit Forest Rally takes place from March 31st to April 1st in Busselton. Fans can follow the action in real time at www.rallylive.com.au, brought to you by Honda.