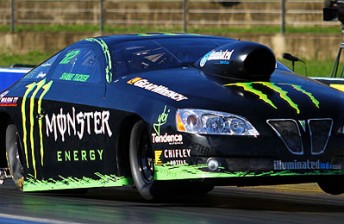 Shane Tucker in the Monster Energy Pontiac tore through one of the closest ANDRA Pro Series Pro Stock fields to record a victory at Sydney Dragway, defeating Jason Grima in the Final.

It wasn’t all plain sailing for the Monster Energy drag racing pin up, with a broken intake valve in the second round almost putting pay to his weekend. The team were able to get past that and were assisted into the semis when opponent, Emilio Spinozzi couldn’t present on the start line.

“We’ve had such a tough run, I have to thank all of my guys, it’s been about three years between drinks and we’re going to party,” said Tucker.
“We had a motto all weekend that says winners never quit and quitters never win. We said we’d turn this deal around and we’ve gone from non-qualifier three weeks ago to winning the race today. It proves that hard work pays off.”

Tucker’s win had serious ANDRA Pro Series Championship implications as well. It rocketed him from seventh to third in the standings, meantime Dennis Whiting – who was widely touted to eclipse the national record in Sydney – had a shock loss in the first round. The Queenslander’s points advantage has been cut to half a point to Michael Ali.

To get to the final Zappia accounted for Stuart Bishop before coming up against top qualifier – fellow West Aussie and long time rival, Robin Judd.

In the final, Zappia in his evocative HQ Monaro,  got past the Sidchrome machine of Ben Bray, who had a solid return to form in Sydney. Zappia set a 5.83 second pass to a 5.91 for Bray. Bray got to the final accounting for Mark Belleri and Peter Kapiris. 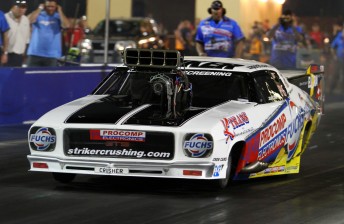 Ross Lemberg continued his dominant form from qualifying in Pro Stock Motorcycle, taking the victory in a personal best time of 7.24 seconds over Michael Gilbertson.