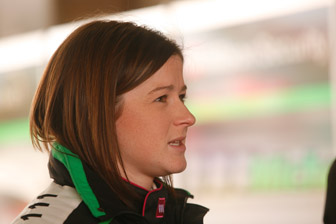 Leanne Tander will make her national-level motor racing return in the Australian Manufacturers Championship next month.

The 31-year-old will drive with Ryan McLeod in the Phillip Island Six Hour, driving the Castrol-supported HSV VXR which finished seventh in the recent Armor All Bathurst 12 Hour.

It will be Tander’s first national-level motor racing event since the birth of her first child Scarlett.

McLeod says he is pleased to have Tander join his squad for the six hour event.

“We’d talked about doing some racing together previously, but it never eventuated,” he said. “When we were looking at who can put in for Phillip Island, we wanted someone different and someone who could add something unique to the race. Leanne was the obvious choice.

“Leanne is pretty good around Phillip Island and has experience in front wheel drive cars, so we are confident of a good showing.

Team Mitsubishi Ralliart drivers Stuart Kostera and Inky Tulloch won the opening round of the championship at Eastern Creek, and McLeod says that their Mitsubishi Evo will be the ones to beat at The Island.

“On outright speed, it’s hard to run against the Evo V,” McLeod said.

“We’re a little bit behind the them, but we’re the equal for everything else. It will depend on the how the race plays out.”

The Phillip Island Six Hour will be held on April 28-29.