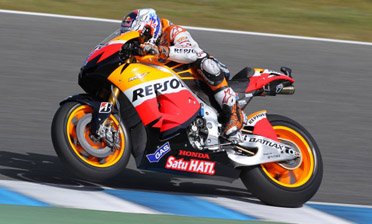 In the final test before the opening round of the world championship at Qatar in two weeks, Stoner’s solid performance has cemented him as the red-hot favourite for this year’s title.

The two-time world champ said he was happy with his bike’s performance, but says there’s still more speed to come.

“Today we were really pleased with the lap times we’re running but I think we can still improve the bike quite a bit before the race here,” he said.

“We feel like we’ve made some progress on a track like this for us. Towards the end of the day we had some chattering but we have an idea what caused this and it’s not the same as in Sepang.

“We did a lot of laps and a longer run to get a little more understanding of fuel consumption and things like this and in general we’re satisfied with how the whole test has gone for us. Now we can go racing which is what we really enjoy.”

Dani Pedrosa was third fastest on the second RC213V Honda while Ben Spies concentrated on the set-up of his Yamaha, going fourth fastest. Cal Crutchlow was fifth, ahead of the first of the Ducatis in Valentino Rossi.

The Aspar team led the CRT pack, with Randy de Puniet in 13th place, just under 2s off the front-running pace.

The opening round of the MotoGP title will be held at Qatar on April 5.

See below for times from the final test session at Sepang