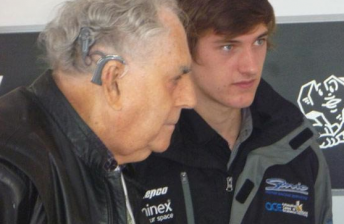 Matthew Brabham has finished second in the first race of this weekend’s USF2000 Grand Prix of St Petersburg.

The race turned out to be a mirror of the season so far, with Cape Motorsports with Wayne Taylor Racing team-mates Matthew Brabham and last year’s championship runner up Spencer Pigot battling it out at the front of the field.

Pigot pipped Brabham for pole by 0.002 sec in qualifying and used his starting position advantage to lead into the first corner. From then on the two pulled away with Brabham contending with too much understeer while trying to find a way passed. A Pace Car with five laps to go gave Brabham a chance but Pigot used his experience to block any passing attempts.

Brabham’s consolation is that he secured pole for Race 2 by setting the fastest lap and a new track record. He also maintained his series lead, ableit by just two points.

“It was very, very intense out there and it was kind of like a rubber band effect between me and Spencer [Pigot],” Brabham said.

“We both had a really good start and managed to pull a gap together and pull away and dice between ourselves for most of the race. The track was getting worse and worse as it started to heat up and grease up, and it was very intense for awhile there.

“When the yellow flag came out, it gave me a chance to get back at Spencer going into Turn One, but he defended well and I couldn’t really quite make it around the outside. Other than that, I am really pleased with how it all went. I learned the track quickly and was up to speed pretty quickly with Spencer, so it has all worked out very well.”