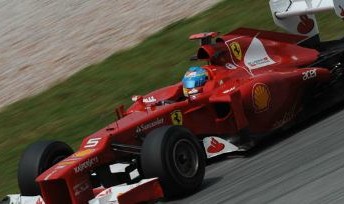 The race was punctuated by a red flag period, with the stoppage called after just nine laps when light drizzle turned into a sudden downpour.

Alonso, driving the Ferrari F2012 that has been highly criticised for its lack of dry-weather performance since the beginning of winter testing, took the lead when the entire field changed from full wet to intermediate tyres soon after the restart.

Alonso then found himself locked in a fight with Perez – the Mexican having gained track position by being one of the first to switch from intermediates to full wet tyres before the red flag.

The Sauber driver gained 7s on Alonso between Laps 33 and 40 to sit right on the tail of his rival, before waiting one lap too long to change to slicks – resetting the margin back to 7s.

Perez then clawed the gap back again, before a mistake at Turn 13 with six laps to go handed a 5s lead and certain victory to Alonso.

Hamilton led the early laps from team-mate Jenson Button but did not have the pace of the two front-runners after the stoppage.

Button eventually finished 13th after breaking his front-wing against the back of Narain Karthikeyan’s HRT on Lap 15.

Sebastian Vettel also tagged Karthikeyan during the race – the contact puncturing the left-rear tyre of the Red Bull with less than 10 laps remaining. The German had been running fourth, but eventually came home 11th.

Daniel Ricciardo finished one place further back in 12th after gaining several positions when pioneering the late move to slick tyres.

For the second week in a row, Pastor Maldonado’s race turned sour in the final laps. The Venezuelan sat 10th before suffering an engine failure with two laps to go.

The issue elevated Schumacher into the points. The seven-time World Champion’s hopes of a strong result had been dashed with a spin on the opening lap after contact with Romain Grosjean.

The Frenchman had jumped to third on the run to the first corner, but joined Schumacher in a Turn 4 rotation. The Lotus driver completed just three more laps before a second spin ended his race.

The championship continues with the Chinese Grand Prix in three weeks time.

See below for the points standings after Race 2 of 20