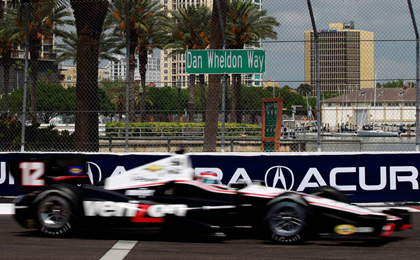 Will Power has set the fastest time in the opening day of the new era of IndyCar racing at St Petersburg.

The Australian Penske driver set the fastest time in the second session amid humid conditions, ahead of countryman and team-mate Ryan Briscoe. Ganassi rival Dario Franchitti was third.

New Zealander Scott Dixon was fastest in the opening practice session before falling to fifth in the second session.

During Practice 2, one second separated the top 21 cars, with Chevrolet-powered vehicles occupying six of the top 10 places.

Power only completed seven laps in the second session but was surprised how close the times were in the session.

“In practice, you don’t have the intensity that you have in qualifying, but you certainly take it seriously as far as getting a good setup.

“You have to get the car right because that’s what you’ll be using in qualifying and the race.”

Other notables included Sebastien Bourdais in 19th while Rubens Barrichello was down in 23rd, hampered by mechanical issues

“With the problem we had this morning, it was pretty much a setback,” he said.

“I spent the afternoon session learning the track, while everyone else was now improving their cars,” the former F1 driver said.

“Hopefully tomorrow I can improve a little more from today.”