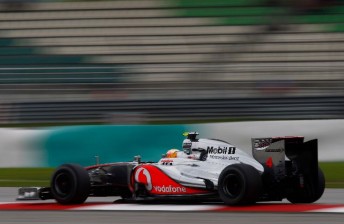 Lewis Hamilton has once again led a one-two qualifying result for McLaren ahead of Sunday’s Malaysian Grand Prix.

Hamilton subsequently aborted a second lap of his own in order to save tyres for the race.

Raikkonen will take a five-place grid drop however having required a gearbox change after Friday practice.

Third on the grid marks the first time that Schumacher has ended either a qualifying session or race in the top three since making his comeback two years ago.

Australia’s Daniel Ricciardo will start 15th after being eliminated in Q2.

Pastor Maldonado missed Q3 by less than 0.2s despite running off at Turn 10 early in the segment.

Jean-Eric Vergne had been a surprise elimination in Q1 after flat-spotting a right-front tyre.

All 24 drivers qualified for the race, with Narain Karthikeyan scraping inside the 107% cut-off by just over 0.3s.