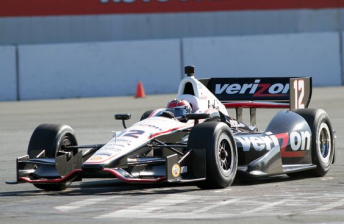 Will Power in his new Dallara chassis during testing

Leading IndyCar driver Will Power is expecting a wider range of race winners in the all-new Izod IndyCar Series, which kicks off this weekend at the St Petersburg street circuit.

With new chassis and engine rules in play, including three different style of engine makers, the 2012 IndyCar Series is set to be one of the most unpredictable in years, according to the Australian Penske driver.

Power, a runner-up in the series for the past two years, will suit up in his new Verison-backed Dallara DW12, the chassis named after the late Dan Wheldon.

Power’s car will be propelled by a Chevrolet engine, while Dario Franchitti, the man who has pipped him to the last two championships, will drive a Honda-powered entry.

Lotus is also an engine player in the diverse field, which includes Rubens Barrichello, who will make his IndyCar debut this weekend for KV Racing Technology alongside countryman Tony Kanaan and E.J Viso. 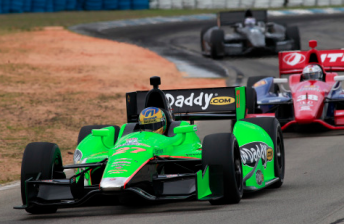 The new engines are 2.2 litre V6 turbocharged units, with the Hondas featuring a single-turbo while the Chevrolet and Lotus will be twin-turbos.

A total of 26 cars will line-up for the opening race of the season this weekend.

Power says that with the significant changes to the category, he expects there to be considerable ripple effect on the results – especially in the opening rounds.

“I’m expecting a wider variety of winners this year, and I’m expecting more drivers in with a shot at the championship, too,” Power said in his column on Racer.com.

“You have to assume that brand-new types of engines might not be 100 percent reliable straight away.

“We don’t know everyone’s relative performance levels and we don’t know how the race will play out with yellow flags, strategies, and so on.”

After finishing second in the past two seasons, Power is confident of going one better in 2012, despite the changes to the regulations.

“We’ve come so close to winning the IZOD IndyCar Series championship the past two years that now the hunger for it is even greater,” he said.

“Every time you think back to near-misses, it doesn’t just bug you – it makes you more determined than ever to nail the title. So I can promise you that I don’t go into St. Pete saying, “I’m looking for a good handful of points,” or “a podium would be good enough.”

“My sole purpose is to make the best of every circumstance in every race and that belief is shared throughout the entire #12 Verizon Team Penske crew. This is what we do.”

CLICK HERE for a calendar of events for this year’s IndyCar Series.

See below for an entry list for this weekend’s opening race at St Petersburg.