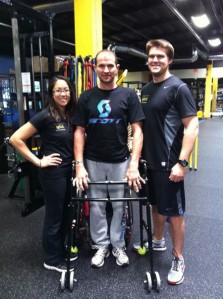 Leigh Adams (centre) will form part of SPEED TV's NZ SGP coverage. He's pictured with trainers from Project Walk in the US.

Adams has been focusing on his recovery from the crash, recently spending over two months in California in an intense training program known as ‘Project Walk’. The program yielded significant results for Adams – whilst he is still confined to a wheelchair, he will continue to train on a regular basis and is aiming to return to Project Walk for more treatment in the future.

His signing to SPEED TV’s telecast is a coup for the official Australian broadcaster of the SGP Series.

“Leigh is one of the most regarded and loved names in the sport with a career spanning more than 20 years,” said SPEED TV Australia Channel Manager, James Harrison. “It is a fantastic way to kick start our live and exclusive coverage of Speedway and Leigh’s unprecedented insight and analysis will make for unmissable viewing for motorsport fans.

“Leigh has had an extremely challenging 12 months and we are, as I’m sure the motorsport community is, absolutely thrilled to see him back involved in the sport.”

The outpouring of emotion and support following Adams’ accident from around the world showed the regard in which he was held in the motorsport community, not just Speedway. In particular the support from Poland was massive – where Adams has a bronze statue that was erected in his honour in the city of Leszno.

“It’s been an extremely tough year for me and I’m just over the moon to be part of the sport I love so much again,” Adams said.  “It’s going to be an exciting season opener and I hope I can offer viewers a different perspective and some fresh insight in to the competition.”