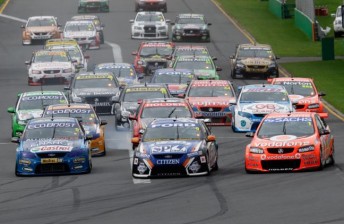 Expect to see a number of new faces in the V8 Supercars paddock next season when the Car of the Future regulations come into force.

According to Dick Johnson Racing team manager Malcolm Swetnam, a skills shortage currently being experienced by the category is likely to – at least in part – be filled by European engineers familiar with higher technology cars.

The COTF represents a significant change from the current vehicles, with an Independent Rear Suspension system replacing the live-axle, an 18-inch wheel and tyre package and an improved weight distribution thanks to the adoption of a transaxle gearbox.

While Waterman has been acting as Dean Fiore’s race engineer during the opening events of the season, the team is currently looking to alleviate Waterman of his trackside duties – a task that’s not proving easy. “It (V8 Supercars engineering) is a very, very specialised field, but I think with Car of the Future it will be different.

“I think you’ll see a major influx of Europeans next year, and we’re already seeing it now in a few teams.

DJR has endured a difficult start to 2012, with all four of its Falcons struggling for speed on the streets of Adelaide.

While the team has not been a competitive force since midway through last year, Swetnam says his crew are working hard to reverse the slump.

“I’m confident it will come right, but I’m not going to put a time frame on it,” said Swetnam of the team’s form.

“Our guys are all putting in 100 percent effort and we’ve just got to suffer through the bumps that may come our way in the short term.”