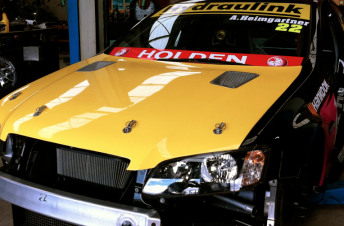 The bonnet vents are located at the top of the bonnet, seen here on Andre Heimgartner's Commodore

After some excessive engine temperatures were recorded in the opening round, category officials have implemented the vents, plus other initiatives, to reduce the heat under the bonnets of the new race cars.

The vents have been designed to let hot air trapped under the bonnet escape at a low pressure point.

Other changes include raising the angle of the Adrad radiator by a further 10 degrees and inserting a wing-style air deflector across the the throat of the intake for the radiator.

The engine temperature of a SuperTourers is not meant to exceed 110 degrees. In the opening event at Hampton Downs, some cars reached that point. The changes are expected to drop the under bonnet by 10 degrees.

“We want to reduce the under bonnet temperatures, but the engine was never in danger of boiling over,” category administrator Mark Petch told Speedcafe.com.

“We can run at 110 no problem, and that is the maximum temperature. Most were at 103, but we want to run them in the 90s, so we are changing things around to get some of the heat out from under the bonnet.

“It’s a nice looking, shaped thing, and its another thing that sets us apart from V8 Supercars.”

Another technical change before Round 2 will be the use of composite bonnets and rear guards across all cars in the field. At Hampton Downs, only the Fords had access to the lighter components.

Round 2 of the V8 SuperTourers Championship will be held over the Easter weekend at Ruapuna International Raceway in Christchurch.