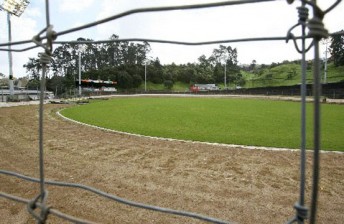 Springs Speedway is entering the final stages of being ready for New Zealand’s first Speedway Grand Prix in Auckland on Saturday, March 31.

At 413 metres on the pole line, the Springs World Championship track will become the largest on the 2012 FIM Speedway Grand Prix, presented by Monster Energy calendar.

The transformation of the popular central Auckland venue from a midget and sprintcar track to an FIM approved, World Championship Speedway circuit is no mean feat. The original surface – a clay base – has had to be torn up and removed in favour of a dirt surface that’s approved by the FIM.

Furthermore, the concrete fence and wire catch fencing that surrounds Springs has had to be modified to have a wooden fence that the Airfence mandatory for Speedway Grand Prix events can attach to.

“We’ve had to bring up 150mm of the clay surface and lay on top of that dirt that has been specifically designed for speedway motorcycle racing,” said Olsen. “The track is built for sprintcar and midget racing and this isn’t suitable for the Speedway bikes.

“We’ve had to remove the catch fencing and put in a wooden fence. For safety reasons, we cannot race against a concrete fence.”

Australasia will have three representatives in the event – three times World Champion Jason Crump – fresh from last weekend’s Red Bull Race Off at the Formula 1 Qantas Australian Grand Prix; emerging star – Chris Holder and Kiwi racer – Jason Bunyan who has been granted a wildcard to the event.

Holder this week called for the Grand Prix to return to Australia. A one-off was held at the Olympic Stadium in Sydney back in October 2002.

“It’s good for the whole sport to get the Grand Prix outside of Europe and Australia has had top riders in there the whole time the series has been running,” said Holder.

“It would be cool to go (back to Australia). We (Australian riders) are getting a lot of support now with the sport being on TV in Australia. It can only make it better for us.

“People knew we raced over here and heard bits and pieces. But now the coverage (through SPEED TV Australia) that we are getting back home through the Elite League shows means it’s massive.”

TO VIEW PREPARATIONS FOR THE SPEEDWAY GRAND PRIX IN NEW ZEALAND, CLICK THE VIDEO BELOW: