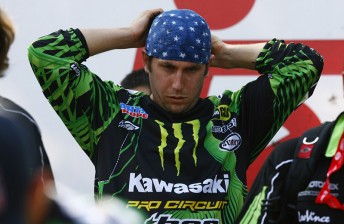 Townley’s signing comes as a result of the team desiring a rider that could continue the development of its Honda CRF450 and race competitively at the front of the field. Townley won the World MX2 Title in 2004 and was crowned the AMA SX Lites East Champion in 2007.

Reed welcomed him to the team:

“After (my) injury, surgery and the initial realisation that I would be sidelined from competition for some time, I needed to consider the team’s ongoing development and if there was a rider that could step in and be competitive in the role,” said Reed.

“We believe in Ben’s talent and work ethic, and combined with the great crew we have at TwoTwo Motorsports, I feel we have the formula to not only represent our sponsors but also challenge, win races and compete for the number 1 plate.”

After a string of injuries in recent years, Townley  – from Taupo in New Zealand – was due to race the full Australian MX Nationals season with Carlton Dry Honda Thor Racing. He has been loaned to TwoTwo so that he can take up the opportunity in the USA:

“It’s an incredible opportunity and one I will be grabbing with both hands.

“I can’t wait to work with the team to race and further develop the bike throughout the season.

“I also need to thank the Carlton Dry Honda Thor Racing team for supporting me with this opportunity,” Townley added.