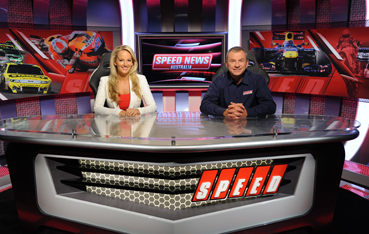 Speed has ramped up its magazine-style program Speed News Australia, with an expanded program for 2012.

The dedicated 24-hour motorsports channel, available on Foxtel, will boost its half-hour program to an hour this year, airing every Wednesday night at 7pm (AEST).

The first episode of Speed News Australia for 2012 will kick off tomorrow.

Hosted by Jessica Yates, the one hour program will provide a round-up of racing results and highlights from Australia and abroad, with in-studio guests and feature stories on the sport’s biggest names.

The first episode will feature an interview with rising Australian Formula 1 driver Daniel Ricciardo, fresh from his ninth place finish at the weekend’s Australian Grand Prix.

In addition, new IRWIN Racing’s Lee Holdsworth will join Yates in-studio to speak ahead of this month’s V8 Supercars event in Tasmania.

Speed channel manager James Harrison says viewers will not only get more content, but a greater spread of category coverage.

“Speed News Australia has proven to be a fantastic addition to our stable of motorsports content,” he said.

“The feedback we received from our viewers in the program’s foundation year was overwhelmingly positive.

“Increasing the show to 60 minutes will allow us to deliver more of the content our viewers love and coverage of more categories than ever before.”

Former 500cc Grand Prix motorcycle winner Kevin Magee will feature on the program throughout the year delivering his unique insight and expert analysis on all things two wheels.