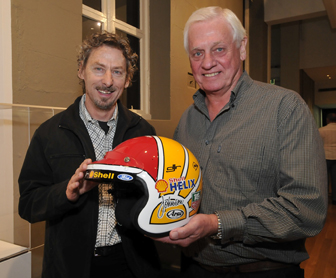 The sculpture is based on a helmet worn by five-time Australian Touring Car Champion and three-time Bathurst winner and racing legend Dick Johnson.

The project is part of the gallery’s current exhibition REVHEAD: the motorsport art of Eamon O’Toole presented by Speedcafe.com, and will include both the finished artwork along with a series of photos documenting its creation.

See below for photo gallery.

The piece will form a key part of the exhibition, which currently features a range of O’Toole’s works spanning from 1987 to 2012, the Dick Johnson helmet will eventually become part of the Ipswich Art Gallery’s permanent collection.

The artwork is the newest piece in the REVHEAD exhibition and is set become a highlight for the gallery.

“The way I want people to look at this artwork would be the same way they would look at a piece of jewellery, it is going to be a lively piece with an incredible amount of detail,” said O’Toole.

The open-faced helmet, which forms the basis of the piece has been generously loaned to Eamon and the gallery for the duration of the project and he is taking to the helmet sculpture with a high level of enthusiasm.

“This is a very fun project for me and I am looking forward to seeing the end result and what everyone who has been following the project thinks,” said O’Toole.

“I am working on the shape of the helmet now and from that I’ll move to working with plastics to further develop the shape.

“I am also putting a lot of emphasis on the decals, I want them to come across as a highlight, more three dimensional than the core helmet shape.

“I have to try a few of my ideas first to see if they work, sometimes especially with highly detailed pieces like this, it takes a number of attempts to make sure I get the right look and feel – I get a lot of surprises by doing it that way.”

The helmet was worn by Johnson in the last three years (1997-1999) of his full time racing career.

The helmet’s eclectic design was the result of a Tourism Queensland campaign after which Johnson changed the colours to red and yellow to match his sponsor Shell.

“This helmet in particular is special to me because I wore it the two years I drove with (my son) Steven in the endurance races,” said Johnson.

“I think the design is unique now and certainly was back then, I’m looking forward to seeing the process involved and the final piece.

“Eamon’s work is pretty spectacular and the fact that he has been recognised with his own exhibition is obviously a reflection on his ability.”
The Ipswich Art Gallery will welcome the finished artwork into its permanent collection; the gallery already houses two of O’Toole’s pieces, the ‘Big Bang’ and a Sidchrome tool chest.

Chronicling the entire production process of a sculpture in pictures is a new concept for the gallery, with the Ipswich Art Gallery having never undertaken a project of this nature or profile before.

Ipswich Art Gallery Director, Michael Beckmann is excited to introduce the working exhibition to the public.

“We are fortunate enough to have the support of Dick Johnson who has allowed Eamon as part of the exhibition to recreate his racing helmet,” said Beckmann.

“It is a piece which not only will become a great addition to our collection but we expect will be very popular with our visitors.

“As Eamon’s work is so unique, the gallery often finds many people ask about the physical process and the materials used to create his sculptures, as well as the time taken and process planning behind one of his artworks.

“His work is very distinct and we find it an exceptional talking point for visitors, therefore we created this concept for the gallery and for Eamon, developing a working exhibition around the Dick Johnson helmet.”

The progress of the helmet can be seen at the Ipswich Art Gallery as part of REVHEAD: the motorsport art of Eamon O’Toole, and on Speedcafe.com.

See below for the developing galley of Dick Johnson’s helmet.