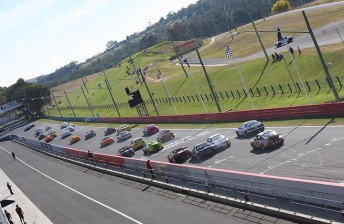 The Production Sports Cars at the 2011 Bathurst Motor Festival

In excess of 280 competition vehicles will descend on Mount Panorama over the upcoming Easter weekend for the 2012 Bathurst Motor Festival.

The Formula 3 Australian Drivers’ Championship will headline the meeting, with the Bathurst event coming just a week after the open-wheel class completes its second round with the V8 Supercars at Symmons Plains.

A total of 18 cars have been entered for Bathurst, although not all are expected to reach the grid.

Of those confirmed, the Jon Mills and Harvest Motorsport Mygales will join the field in Tasmania ahead of their Bathurst assaults, while Ben Gersekowski will complete both events in Cooltemp Racing’s F304 after crashing his regular mount in Adelaide.