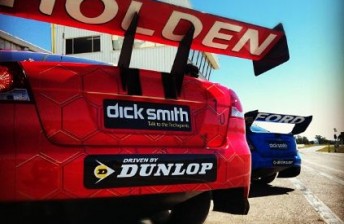 The COTF prototypes in Winton's pitlane

The V8 Supercars Championship could feature a more aggressive soft tyre when the Car of the Future makes its debut in 2013.

V8 Supercars’ two COTF prototypes are at Winton today, testing a new soft compound against an 18-inch version of the existing rubber.

The category has already signed off on its hard tyre package, and expects to make a final decision on its soft compound following today’s test. Both the hard and soft tyres will utilise the same construction.

According to Dunlop’s V8 Supercars operations manager Kevin Fitzsimons, the more aggressive soft option could be chosen in order to provide a new challenge to the teams.

“We know the durability of the existing soft compound tyre and everything so we’re just information gathering at the moment with a little bit of a softer compound,” Fitzsimons told Speedcafe.com.

“It might give a bit of a bigger (performance) gap or it might just be that it drops off even faster.

“The teams and drivers have got the current soft compound tyre sussed out pretty well, they know how to make them live now, so we might have to throw them a bit of a curveball.”

While Mark Skaife made an appearance at the first COTF tyre test at Phillip Island last year, Mark Winterbottom and Rick Kelly have completed the bulk of the running, and are again behind the wheel at Winton today.

Fitzsimons says that the new tyres have been developed to give the drivers more confidence, with the intention of improving the racing.

“If you take the current 17-inch tyre and write down everything that it can’t do, we need to make sure that the 18-inch tyre does it,” said Fitzsimons.

“You can’t dive up the inside of someone now because you don’t have the confidence that you’ll be able to make the corner.

“The tyre that we’re currently using is in its 11th season of competition as far as its construction and everything like that, and times have changed.

“The cars have got better and better, and we need to move the tyres along with that.”

The final sign-off on the tyres will represent another important milestone in the development of the COTF, with brake and aerodynamic testing still to follow.