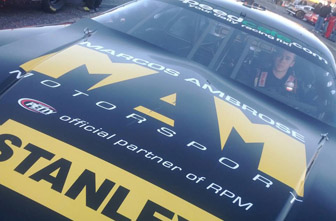 Marcos Ambrose Motrsport had an up and down opening round of the UARA Stars Series at Hickory Motor Speedway on the weekend, with Ben Rhodes finishing a storming third, while his Australian team-mate Clayton Pyne failed to finish.

Following on from his late race charge at the same venue last weekend in the Whelen All American Series race, Rhodes once again came from behind, after qualifying 10th out of 28 cars.

The race started cautiously for the young Kentucky-based driver, slipping back to 12th while saving tyres in the opening exchanges.

At the halfway mark of the 150 lap race, Rhodes was classified in ninth, before making his charge in the last 50 laps.

Rhodes cracked the podium with 12 circuits remaining, and managed to hold off the competition in a wild run to the finish following on from a late-race caution.

For his efforts, Rhodes also picked up the Rookie of the Race Award.

Pyne meanwhile had another luckless run, after qualifying in 22nd position.

Early in the race, the now New York resident charged forward to 16th place while conserving his tyres, before his race unravelled when contact from behind sent Pyne to the pits with a flat tyre.

The race then turned into an extended test session, however that was curtailed with mechanical problems on lap 104.

Marcos Ambrose Motorsport now heads to Dillon Motor Speedway on April 7th for the second round of the UARA Stars Series.