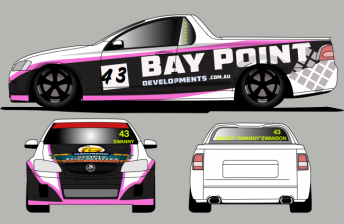 The model-turned-racer will drive for Williams Race Tech in its Bay Point Developments Holden VE, driven by Charlie Kovacs Jr at the Clipsal 500 Adelaide.

The drive is a one-off at this stage, with Swanson’s management team hunting for backers for her to continue her racing endeavours.

Director of Bay Points Developments Colin Bradley is planning to take over the seat from Hidden Valley onwards.

Swanson’s maiden Utes drive will make her only the fourth female to drive in the category, now in its 12th season. Swanson joins Danielle Agiro, Leanne Tander and Lauren Gray as the female V8 Utes drivers.

“The opportunity to race a V8 Ute in the Tasmanian round of the national series is just fantastic, and this opportunity arose only recently,” Swanson said. 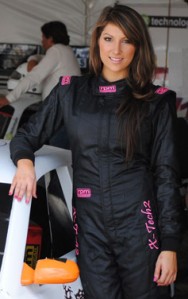 “There has been some furious peddling in the background and the plan is to finish this round well. I know that with this team we can do it and I hope that a good round here will help me secure some sponsors that will let me compete for the rest of the year.”

The part-time model has only been racing since 2009. She made her circuit racing debut in an Aussie Racing Car, and was a contestant on the reality TV show Shannons Supercar Showdown. Swanson is also studying a bachelor of business Law in Melbourne.

Swanson and the rest of the Auto One V8 Utes Series will hit the track for practice next Friday (March 29).

After one round of the V8 Utes Series, Kris Walton leads the field from Ryal Harris and Andrew Fisher.