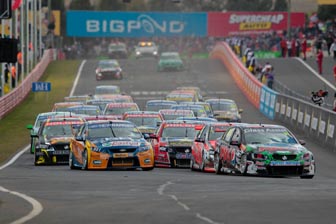 The Seven Network has been nominated for a TV Week Logie for its coverage of the 2011 Supercheap Auto Bathurst 1000.

Voting for the award was conducted through an online survey.

The Bathurst 1000 is up against the 2011 Australian Open Tennis (Seven), Melbourne Cup Carnival (Seven), State of Origin III (Nine) and the Tour de France (SBS).

The TV Week Logie Awards are the Australian television industry awards, which have been presented annually since 1959.

The coverage of ‘The Great Race’ is produced by V8 Supercars Television in conjunction with the Seven Network.

The 54th annual TV Week Logie Awards will be held on April 15 at the Crown Entertainment Complex in Melbourne.

The event will be televised on the Nine Network.