Ricciardo: I could have done even better

Ricciardo: I could have done even better 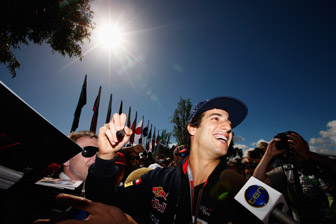 Daniel Ricciardo says his career best ninth place finish in today’s Qantas Australian Formula 1 Grand Prix could have been even better if not for his involvement in an incident at the first corner.

The Toro Rosso driver had appeared to be out of contention for points when he broke his front wing on Bruno Senna’s Williams exiting Turn 1.

Ricciardo was forced to pit at the end of the opening lap for a new nose, and subsequently went a lap down when he made his first scheduled stop later in the race.

Restarting 15th, Ricciardo then benefited from several late incidents and a chaotic final lap to score his first ever World Championship points in ninth.

“It’s good to finish ninth, but I think I could have done better,” said Ricciardo.

“I made a decent start but there were too many of us there. I hit the left front quite hard against a Williams and had to come in to change the nose.

“I had to race with a bit of damage after that. It was not easy to come back, but I never gave up.”

Ricciardo gained three places on the final lap alone, taking advantage of incidents for Nico Rosberg and Pastor Maldonado before passing his team-mate Jean-Eric Vergne at three corners from the chequered flag.

“I was a bit lucky to be the last one in that group because I could have a clear picture of the other cars going off in front,” said Ricciardo.

“Then I had a chance to attack Jean-Eric. He defended into Turn 13 and I thought I could make the switch back and I did, which put me in P9. The last few laps were crazy and I was pushing like hell.

“I’m extremely happy and it’s great to score my first F1 points here at home in Australia, where the crowd has been just fantastic all weekend long.”