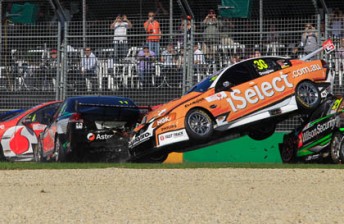 The crashed Lucas Dumbrell Motorsport Commodore will head to Triple Eight Race Engineering’s Brisbane home for repair ahead of the Symmons Plains V8 round in two weeks time.

Douglas was the innocent bystander in yesterday’s Lap 1 wreck at Albert Park. The incident was caused by James Courtney when he collected the rear of Jamie Whincup’s Commodore. Courtney was later given a 50 second time penalty for the incident.

The iSelect Commodore VE was assessed at LDM’s Melbourne workshop last night where the team has elected to take the Triple Eight-built car back to its ‘home’ for further repair before travelling by road and ship to the Tasmanian V8 event.

Douglas will not compete in today’s final non-championshiop V8 race at Albert Park.

It is the second incident that the Douglas has been involved in since his full-time debut at Adelaide two weeks ago.

Like his Adelaide crash, Douglas says that it was a case of being caught in others accidents.

“It was another one of those unfortunate situations where, like Adelaide, I was in the wrong place at the wrong time. It’s not what this team deserved,” Douglas said.

“The car’s heading back to Triple Eight in Brisbane to be repaired, and there’s a lot of work to do before it’s loaded onto the ship for Tasmania.”

The Falken Tasmania Challenge will be held at Symmons Plains on March 30-April 1.