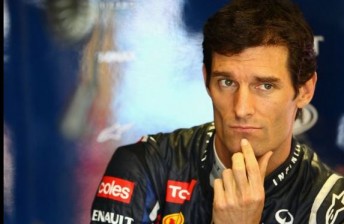 The now 35-year-old Webber has finished third in the championship for the last two seasons, which have both been won by team-mate Sebastian Vettel.

Webber is again racing under a one-year deal with Red Bull in 2012, and is expected to come under pressure to retain his seat next season from Toro Rosso’s latest signings Daniel Riccardo and Jean-Eric Vergne.

“Mark is going to want to start very strong because he knows that probably this year is going to be his last chance of getting a World Championship,” said Herbert at Albert Park.

“We all know that the chances of getting a championship don’t come very easy. He had that one chance a couple of years ago and unfortunately it didn’t work for him.

“He didn’t have the best of years last year, now he’s got to sort of come back and get himself in a position where he can have another go.

“He had a chance let’s say because he was in the best car last year but it didn’t work out, and this (year) is a chance that he needs to grasp, because obviously there are some young guys coming up in the Toro Rossos for example, and if they do a good job they’ll be there to take his place.”

Webber will start fifth for today’s Grand Prix after both Red Bulls proved surprisingly off the pace during qualifying.

Despite not having KERS available to him during Q3, Webber managed to out-qualify Vettel – a feat only achieved three times in 19 attempts during 2011.

The Australian continued to talk positively of his feeling in the new Red Bull RB8 after the session, emphasising that the lack of blown diffusers this year, in addition to the different Pirelli tyres, is having a positive effect on his speed.

“The cars were very, very different – all the cars, not just ours – in terms of how the blown diffuser worked into the corners, it was very sensitive on rpm,” said Webber.

“These cars are a little bit traditional. They are a little bit more like a race car. The blown diffuser was an extreme bit of kit and I probably never really got my teeth right into those.”