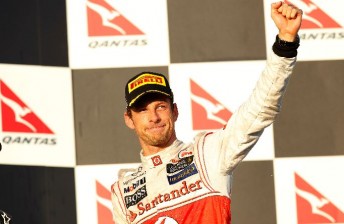 Jenson Button on the podium

Jenson Button has praised the efforts of his McLaren team following the British squad’s strong start to the season in Australia.

The McLarens proved the class of the field at Albert Park, locking out the front-row of the grid on Saturday before taking a one-three result in the race.

Button got the jump on team-mate Lewis Hamilton off the grid, and was only headed briefly in the pitstops thereafter.

“Starting the year strong for this team is really important,” said Button.

“The last few years for us have been tricky coming into the first race.

“To come away with Lewis’s pole yesterday and the victory today, I think it puts us in a great position for the next few races and on the right foot.

“So a big thank you to everyone in the team who are working so hard, and have been working those extra hours to get the parts out.”

Button held a 10s margin over Hamilton during the second stint, before a Safety Car as the final stops unfolded saw Vettel move into second and close up to the back of the race leader.

“The biggest worry was the Safety car,” admitted Button.

“When you pull a 10 gap, it is a great place to be, as you can control it to a certain extent.

“But as soon as the Safety Car comes out and it is 6 o’clock in the evening, it’s difficult to keep the temperature in those tyres.

“That was a big worry for me, but I was able get a good gap on the restart and get out of the DRS zone, which was important.”

Button has now won three Australian Grands Prix in the last three years, and revealed a surprise common denominator after the race.

“I’ve actually stayed in the same bedroom those three years (that I’ve won) – maybe that’s the reason why,” he joked.