Ricciardo: Midfield start will be a new experience

Ricciardo: Midfield start will be a new experience 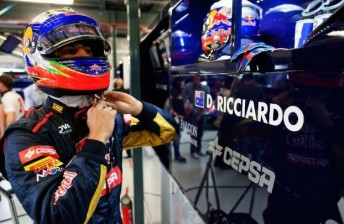 Daniel Ricciardo says he is looking forward to starting a Grand Prix from the midfield for the first time at Albert Park tomorrow.

The West Australian failed to progress from Q1 in each of his 11 qualifying attempts last season with the hapless HRT squad, but today secured 10th place on the grid for his maiden outing with Toro Rosso.

Ricciardo later admitted that making the final segment of qualifying had been somewhat of a surprise.

“Before we got to Melbourne, we did not have a clear idea of how our pace would compare with the other teams,” he said.

“In fact, I thought Q3 might have been a little bit out of reach, so this was a really positive result for me and for the team.”

Having elected not to record a time in Q3, Ricciardo believes he is set-up well for a strong result in the race.

“We should have a strong race as we are in good shape, so it will be a case of trying to get the best start possible followed by a good opening lap and see how we get on from there,” he said.

“It will be a bit of a new experience for me compared to last year as this is the first time I start a Grand Prix from as high as the midfield.

“Today, we have laid the groundwork for Sunday and (team-mate) Jean-Eric (Vergne) is not far behind me, which will keep me on my toes, so as a team we can be pleased with the work we have done.”

“He’s right in the guts of it there for some great experience tomorrow,” said Webber of Ricciardo’s grid position. “He did a really really good job.”