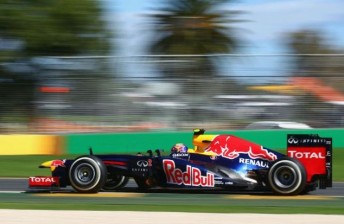 Mark Webber spoke to the media at Albert Park following his fifth place effort in qualifying for the Qantas Australian Formula 1 Grand Prix.

QUESTION: Sebastian Vettel was saying that the car was working OK, just fine tuning. Is that what you think?

MARK WEBBER: Fine tuning, yeah. As all the teams do, we have extremely limited time in the winter. We had a pretty smooth winter, but we would have liked it to go a bit better, in terms of track time and having a better understanding of the car.

The base is absolutely there. The car is from good stock, from the other cars that Adrian (Newey) has designed, similar to this car. It’s always the way in Formula One – when you are a little bit off, you are extremely exposed, and we saw that today.

We have done that to the opposition may times before, and today, we weren’t ‘firing on all 10’, and that’s the result.

Most sports, you get what you deserve, and today, we did our best and it wasn’t enough on the day. They haven’t handed out any trophies, so we’ll see what happens tomorrow.

QUESTION: You had a few issues with KERS and you could only do one run. With a perfect qualifying lap, where would have you been?

WEBBER: Starting the lap without KERS, it’s certainly not a positive thing.

I had to go again in Q2 because we had some understanding to do on KERS without the (additional) braking (provided by the system), and that lap wasn’t ideal. I made a mistake and I had one lap only. That lap worked out quite well. I don’t think I could have done a huge amount more.

To answer your question, I think the lap was 0.1s off the optimum, plus 0.3s (from the KERS loss), but it’s a coulda, shoulda, whoulda…

QUESTION: Do you think you have the chance to come back tomorrow and win the race?

WEBBER: We’re certainly looking to go forward. Fifth is my lucky number here. We’ll try and move forward, but also keeping in mind it’s a long year. We need to get points in the bank and massage more out of this car quite quickly.

I feel we’ll find out tomorrow, and find out next Sunday how we are on Sunday afternoons. Saturday is probably not one of our strengths at the moment. Let’s see how it works out and how it works out on a different track in Malaysia and how the tyres will behave at that event.

QUESTION: An upside to qualifying was that you finished in front of Seb, which didn’t happen too often last season. Is that a cause for optimism?

WEBBER: Absolutely. It’s pretty clear from winter that I’m much more comfortable in the car, but it’s much more relative. I’m not happy where we are on the grid. It’s disappointing for all of us for where we are. It was good in the past to be there, but the bar has been lifted. We need to press on and focus on how we can improve.

QUESTION: Do you feel more comfortable in the car this year? Is it the tyre performance?

WEBBER: Probably a little bit tyres, but I started to get a handle of those in the back part of the championship. The cars were very, very different – all the cars, not just ours – in terms of how the blown diffuser worked into the corners, it was very sensitive on rpm.

QUESTION: As a fellow Aussie, how impressive was it to see Daniel Ricciardo qualify inside the top 10?

WEBBER: I saw him get into Q3, which was a bloody great effort. I think it was a good battle between him and Jean-Eric Vergne. They performed better than they thought they would have done. It’s good they’ve done well. He’s right in the guts of it there for some great experience tomorrow. He did a really really good job.

QUESTION: Are you surprised with the results of the grid?

WEBBER: Not really. Only Romain (Grogean). I must say, I’m really happy for him off a tough first season in F1. He went away, some junior categories, bouncing around, bit of sportscars, bit of this and that. He had to chip away in the winter because there was a lot of interest in Kimi.

He’s not a driver bringing a ‘gazzilion’ dollars, it’s about talent and perseverance. That’s something I admire for what he’s done. It’s good the rich guys haven’t been favoured in that position, and I look forward to passing him at some stage tomorrow!