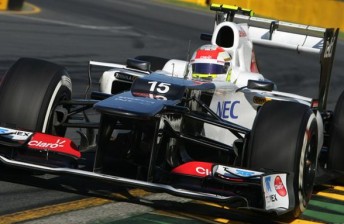 Sergio Perez will start from the back of the grid

Sergio Perez will start the 2012 Qantas Australian Formula 1 Grand Prix from the back of the grid after being handed a five-place grid penalty for a gearbox change.

The Mexican had qualified just 17th after his gearbox broke early in Q2.

With the two HRT entries having been denied a start in the race, the penalty means Perez will bring up the rear of the field.

According to the Swiss outfit’s head of track engineering Giampaolo Dall’Ara, neither driver’s starting position reflects the true pace of the team’s new car.

“It was bad luck that both our drivers were on their first runs when Fernando Alonso spun (in Q2).

“In the second outing Kamui got held up by Mark Webber, who made a mistake in corner one in front of Kamui when he was on his out lap and was then not able to heat up his tyres properly.

“Sergio suffered a gearbox failure which we need to analyse. We will now do our utmost to fight back in the race.”