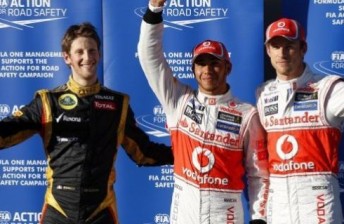 Romain Grosjean says that his sensational third place qualifying effort at Albert Park has vindicated his decision not to give up on a career in Grand Prix racing.

The now 25-year-old Frenchman was dumped by the Renault team following a seven race spell with the squad in 2009 that failed to yield a single point.

Having since rebuilt his career by winning races in a variety of categories including Auto GP, FIA GT1 and GP2, Grosjean has returned to the Renault team this year under its new Lotus F1 guise.

While much of the pre-season attention has been on Grosjean’s team-mate Kimi Raikkonen, the Frenchman will start tomorrow’s race 15 places ahead of the former World Champion.

“Never give up, that’s the lesson,” said Grosjean of his career fightback.

“A few people believed in me at the toughest time and today I think they were with me in the car.

“I’m very happy to be with this team and I think they are working very hard for us and we are trying to make the best of everything we can.

“It’s not a dream; we did it. We can be proud of it and tomorrow we’ll keep working to improve ourselves, trying to get the best result as possible during the race and then in the next races as well.”

Raikkonen meanwhile is refusing to panic after his shock Q1 elimination, saying that the steering issue that saw him parked in the garage for much of Free Practice 1 yesterday did not contribute to his early exit.

“There’s no issue with the car – I made a mistake and there was a communication issue so the timing wasn’t right to get another lap,” he said.

“It cost us a good qualifying position but that’s how it goes sometimes. We should have easily been in Q2.

“It’s not the best start but we’ll try to put it right in the race – there’s plenty of speed in the car.

“The steering was fine. It’s not perfect for exactly what I want but it doesn’t affect my driving.

“For sure we can do better than 18th tomorrow so we’ll have to see what happens.”