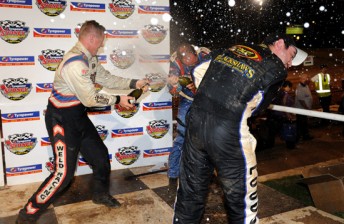 Garry Brazier has taken out the preliminary A-Main for the $50,000 to win Scott Darley Memorial at Tyrepower Sydney Speedway. He swept past Grand Annual Sprintcar Classic winner, Ian Loudoun to take the win.

Loudoun led for much of the 30-lap affair – but couldn’t hold out the challenge from Brazier in the Rocket Industries machine.

Finishing third was Max Dumesny – who made a welcome return to the Parramatta podium.

Ben Atkinson rode out a wild flip at the beginning of the event after contact between he, Ian Madsen and Robbie Farr. It resulted in Atkinson and Madsen having a heated confrontation. The only other major casualty was Roddy Bellbowen in the Spies-Hecker entry.

Tonight, the $50,000 to win event will conclude. The Scott Darley Memorial Challenge honours the memory of Darley, who died in a race accident at the venue in 2008.