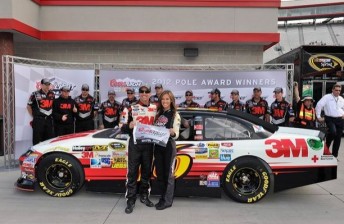 The Roush Ford driver edged out A.J. Allmendinger’s Penske Dodge by 0.001s, while the Chevrolets of Ryan Newman and Jeff Gordon will share the second row.

“It was a huge thrill ride,” said Biffle of his lap around the 0.533-mile bullring.

“The key is to not overdrive it and as soon as the car turns in the corner you have to get back to the throttle.

“I went back to the gas fairly early and was a little worried about it making the rest of the corner.

“It got loose up off both ends because I went to the gas so early in the middle of the corner.

“I was just pushing the envelope as much as I could. If you ask me to do it again I probably can’t. I was on the edge and like I said, one one thousandth of a second I beat the 22 car. That is not a lot.”