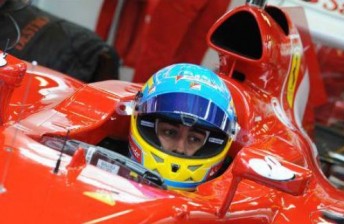 Fernando Alonso says that Ferrari will have to work ’25 hours’ a day in order to catch its rivals this season after a dismal showing in qualifying for the Qantas Australian Formula 1 Grand Prix.

The two-time World Champion was just 13th fastest in final practice, before eliminating himself from qualifying by spinning into the Turn 1 gravel trap during Q2.

The mistake means that Alonso will start the race from 12th position – four places ahead of team-mate Felipe Massa.

“We are obviously not quick enough, we are not competitive to fight for the top places at the moment,” Alonso told assembled media, including Speedcafe.com, after the session.

“It is something that maybe we knew or expected after winter testing and maybe today we confirm that we are not competitive.

“There is still a lot of work to do, we have to be more united than ever.

“I’m sure we work 24 hours a day before this race, now we need to work 25 and it is the only way to improve the car and to win races soon.”

Alonso admitted that he is unsure if he could have made the final Q3 session even without the spin.

“Maybe it was possible to go in Q3, maybe not, because the times were very close,” he said.

“If you go in Q3 you have no new tyres for tomorrow, so maybe at the end of the day it is a good compromise to be P12 with new tyres.

“(Tomorrow) points will be the first priority, and then the second priority the top three.”

Asked if the F2012 is the worst car he has ever started a Grand Prix season with, Alonso pointed to the fact that the closeness of this year’s field has placed greater emphasis on the Scuderia’s struggles.