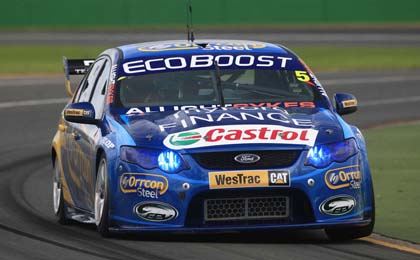 Winterbottom took the lead from a fast-starting Shane van Gisbergen halfway around the opening lap, and was not headed for the duration.

Tander had run third for much of the race before running wide at Turn 15 and losing five places.

The Safety Car had been called on just the second lap when contact between Steve Owen and Michael Patrizi at the exit of Turn 10 spun the Etihad Commodore into the path of Jason Bright.

While Owen was able to continue, the incident left the two Holdens stranded on the circuit with major damage – ensuring Patrizi, Bright and 26th placed runner David Wall would be the first three cars eliminated under the ‘drop zone’ format.

According to the offical timing, Wall, Jonathon Webb, James Moffat and Fabian Coulthard had been the only four drivers to start the race on the hard compound tyres.

While Webb and Moffat found themselves in the second drop out group on Lap 4, Coulthard was able to remain on the circuit until the end of Lap 6, and will start this afternoon’s Race 2 from 18th position.

The lack of time ensured that Race Control did not deploy a ‘competition’ Safety Car after Lap 9.

The V8 Supercars will return to the Albert Park circuit for Race 2 at 1420.

See below for the full qualifying race result