Australian Formula One drivers Mark Webber and Daniel Riccardo remain in high spirits after the opening day of running for their home Grand Prix, despite recording just the 11th and 21st fastest times in the afternoon session respectively.

The pair both ventured off course during the weather affected 90 minutes of running, with Ricciardo completing a 360 degree spin at the fast Turn 11-12 chicane.

Webber had been fifth fastest in the morning session, which was also run in drying conditions.

Having struggled to come to grips with the Pirelli tyres last season, the 35-year-old emphasised his pleasure at the way his style is gelling with the company’s softer construction 2012 rubber.

“I feel confident in the car. I’m ahead of it, which is nice. I’m driving it, it’s not driving me,” Webber told the assembled media, including Speedcafe.com, after Practice 2. 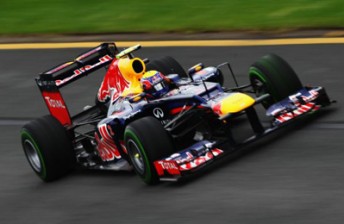 “I feel very stable in it, and obviously both (team-mate) Sebastian (Vettel) and myself are every similar on what we are demanding of the car at the moment.

“Tyres are clearly the main focus, to work out where they are, see how the car feels on different fuel loads and all the other variables.

“It was pretty good on the last run. We had a bit more juice on and the car was working OK. Obviously that was for our Sunday preparations.”

Webber and Ricciardo both spent time at the top of the sheets today, with the West Australian one of few drivers to complete substantial running early in both sessions.

“The changing track conditions made it a bit ‘cat and mouse’: you’d go out on one tyre, then come in and wait for it to dry a bit and you had to be patient,” said Ricciardo of his day.

“This afternoon, I did a long run and I think we can still gain some more race pace and the good thing is I know what we have to do to achieve that.

“This track is very different to the two circuits where we tested this winter, but it looked positive, so I’m hoping to get a good grid position tomorrow.

“We’ll see what the weather does, but even if it rains, I expect there’ll be a big crowd to cheer us on.”

Webber added that he is not concerned by the pace shown by any of Red Bull’s rivals today, with the true pecking order not expected to be revealed until tomorrow afternoon’s qualifying session.

“You can only focus on yourself and the team has worked incredibly hard,” said Webber.

“We had a really good winter, and there’s been a huge amount of work to get to this point.

“Today was our initial statement of that, but it’s an incredibly long championship.

“We had a few things to get through today, obviously we didn’t get as much as he liked, but that was the same for everybody. Melbourne weather can do that sometimes.”

Rain is not expected to return to Albert Park for the remainder of the weekend.