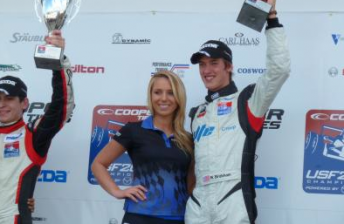 Matthew Brabham celebrates on the podium

Third-generation Australian racer Matthew Brabham has taken out the opening race of the 2012 Cooper Tires USF2000 Championship at Sebring.

Having qualified second on the grid, the 18-year-old took the lead off the start as chaos unfolded behind.

“It is really fantastic to get my first win in the first race of the series” said Brabham afterward.

“I can’t explain the feeling. My plan was just to stay out front and my plan went through. It was a pretty easy race out in front except for the yellow flags bunching us up.

“It was a bit disappointing to finish under yellow but I’ll take any win as it comes. I am just really pleased with how everything went and would like to thank the guys at Cape Motorsports.”

Brabham will start tomorrow’s second round from pole position.