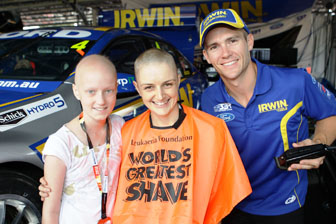 In the IRWIN Racing garage at the Australian Grand Prix today, Holdsworth shaved the head of Skye Mee who has raised over $5000 to help fund research for the eventual cure of leukaemia, lymphoma and myeloma.

Mee decided to get involved after her 11-year-old cousin Maybelle Wood was diagnosed with acute lymphoblastic leukaemia (ALL), in October last year.

‘ALL’ is a type of cancer that affects the blood and bone marrow and has seen young Maybelle spending a lot of time at the Royal Childrens’ Hospital receiving chemotherapy.

Maybelle, from Ballarat, and her mother Bianca travel between the central Victorian town and Melbourne regularly, with Bianca staying in Ronald McDonald House.

“Maybelle is a beautiful girl and it was a shock when she was diagnosed with acute lymphoblastic leukaemia,” Mee said.

“Rather than let it get me down, I decided I wanted to support her and the family and help raise some money.

“The support by my friends, family, people at work and the V8 Supercars fraternity has been amazing.

“When you consider that raising $2000 alone will support a major blood cancer research project for a week, I’m proud of what I’ve been able to achieve by simply shaving my head.

“I hope this goes some way in finding an eventual cure for leukaemia and that one day children like Maybelle won’t have to go suffer like they do now.”

For V8 Supercars driver Holdsworth, shaving Mee’s head was an honour and one that he hopes will get a few more people donating.

“I’ve actually never been asked to shave someone’s head, but this is such a good cause how could you say no,” said Holdsworth – a driver who should know a thing or two about short hair cuts!

“Talking to Skye about it, and you can’t help but agree, I’d rather shave my head than have leukaemia.”

The Leukaemia Foundation is urging people to attend World’s Greatest Shave public events in their community.