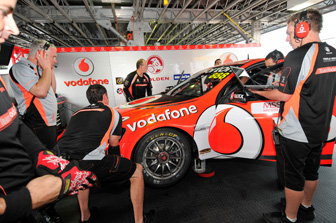 Craig Lowndes with his TeamVodafone squad at the AGP

Craig Lowndes will start tomorrow’s third non-championship V8 Supercars race from the back of the field and, with a brand-new engine.

The champion team has elected to change the engine in Lowndes’ car ahead of tomorrow’s third race of the MSS Security V8 Supercars Challenge.

Team manager Adrian Burgess says that the change will be effected this afternoon.

“He called in on the radio and we made him do another lap because we couldn’t see anything on the telemetry. There was still an issue, so he came in, we had a look around and there’s nothing obvious, so we’ll change it tonight.

“We can’t see externally what the problem is, so we need to open the old girl up back at the factory. We’ll just pull this one out and drop another one in and go again tomorrow.”

While TeamVodafone is one of many teams to be running development parts in this weekend’s non-points meeting, Burgess would not comment whether the failure was related to the new components.

“We’re certainly trying things all weekend, but we didn’t come here to beaten,” he said.

“We’ve got some great sponsors here – it’s a big weekend for Vodafone – but equally, we have to take the opportunity to learn as much as we can for the next championship round in Tasmania.”

Triple Eight’s engines were the talk of the paddock during Sunday’s leg of the Clipsal 500 in Adelaide two weeks ago after Jamie Whincup’s engine developed a misfire, costing him any chance victory.

Race 3 of the MSS Security V8 Supercars Challenge will be held at 1520 tomorrow.