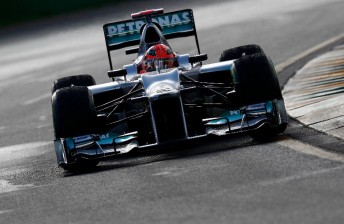 Mercedes team principal Ross Brawn has downplayed the benefit of the radical rear wing design that the team is running at this weekend’s Qantas Australian Formula 1 Grand Prix.

First seen on the Mercedes W03 during pre-season testing, it is understood that the rear wing is allowing the car’s front wing to be stalled whenever its DRS is activated.

Achieved using a duct in the rear wing endplate that channels air back through the car to the front wing when the DRS flap is open, the concept theoretically allows the car to remain balanced through high-speed corners while the DRS is being used.

The system should prove particularly beneficial in practice and qualifying, where the DRS is allowed to be activated anywhere around the circuit.

While it is expected that rival teams will look to copy the initiative following the final ratification of the design by FIA scrutineers in Australia, Brawn has warned against overestimating the performance advantage that is actually being extracted.

“We have an interesting system on the car and it’s not complicated at all, so I’m sure other teams are looking at it and they need to decide if it’s worthwhile or not,” said Brawn when asked of the system.

“But it’s not in the same magnitude as the diffuser concept that we had or even the exhaust concepts the cars ran the last few years.

“It’s obviously helpful, that’s why we’re doing it but it’s not a massive performance gain.”

Michael Schumacher emerged fastest for Mercedes in the first Friday afternoon practice session of the season at Albert Park today.

Although inclement weather conditions made it difficult for teams to fully understand where they sit relative to the field, Brawn is confident that Mercedes will make a better start to the season than it did last year.

“We’re much better prepared than we were last year,” said Brawn.

“Last year we were not in good shape at this stage of the season. We’d tried to leave it as late as possible to run the final aerodynamic package and that hadn’t gone that well, and we had some cooling issues, some other functionality issues of the car and that takes a lot of resource out of the organisation fixing those things.

“We’re in a place now where the car functions well, it cools well, it does all the basic things properly. And all of our resource can be focussed on trying to find performance for the next part of the season.”