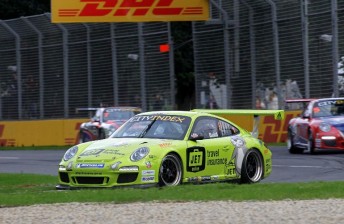 Baird used one of his trademark fast-starts to head Jonny Reid (Hunter Sports Group) into the first corner and was never headed, winning from Reid and championship leader Alex Davison (Roma Caravans).

“The car was sensational. I was absolutely cruising and gapping the field laps before I flat-spotted the tyre. I dropped the right front onto a damp patch going into turn six and peeled a tyre, so it had a flat spot for the rest of the race,” said Baird.

“But sometimes you get the car right, and it was absolutely spot-on. I’m not touching it for tomorrow.

The real excitement was in the battle for fourth.

Davison was fighting hard to keep Frentzen behind him, but the ‘Guest’ driver made a strong move with Mark Skaife also looking to make up a spot. After swapping some paint, the German tooj the position, while Davison closed the door on Skaife and in the process Twigg grabbed sixth spot ahead of the V8 champ.

“That was the best drive I’ve ever had in my life, it was something that satisfies all those years of racing cars. To run with those guys and sit in that battle there is something I never really thought I’d achieve,” said Twigg.

“It was by far my best drive and most satisfying drive of my career.

“I was doing a Mark Webber down the radio. It was a genuine pass, he made a blue. I think everyone’s tyres started to go off with three laps to go, Skaife’s included. I think they all started dicing and forgot about me. That race was so satisfying; something I’ve been waiting for this for a long time.”

The second race of the weekend will be held at 12.30pm Saturday.