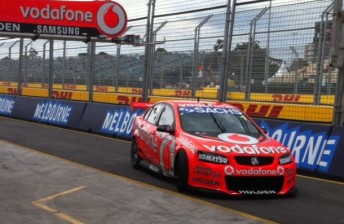 Jamie Whincup has topped the time sheets at the conclusion of first practice for the MSS Security V8 Supercars Challenge at Albert Park.

Lee Holdsworth made a late charge to second fastest in the IRWIN Racing Ford, albeit almost 0.4s slower than the reigning champion.

Mark Winterbottom ended up third having briefly held the top spot before Whincup’s effort, while Jason Bright and Will Davison rounded out the top five.

Craig Lowndes surived two offs during the session, the first coming at Turn 3 on his maiden flying lap.

The most spectacular off was saved for Davison, who slid sideways through the Turn 1 gravel trap after locking his right-front tyre on the entry.

The session was run in dry conditions despite showers having briefly hit the circuit earlier this morning.

A second 30 minute V8 Supercars practice session will take place at 1610 local time, followed by 30 minutes of qualifying from 1830.

All cars are running on their bank of eight pre-marked hard tyres during the practice sessions, with the allocation of eight hards and 12 softs to be used from qualifying.