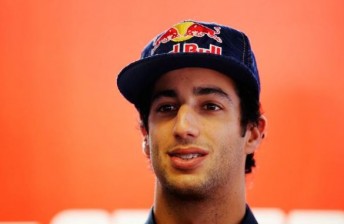 West Australian Daniel Ricciardo says he does not expect this weekend’s Qantas Australian Formula 1 Grand Prix to be as ‘intense’ as his debut F1 appearance last season.

The 22-year-old has moved to Toro Rosso this year after spending the second half of 2011 driving with backmarker squad HRT.

Ricciardo had been competing in the Formula Renault 3.5 category when got the call-up to make his Formula 1 debut at Silverstone.

“I think the first one last year in Silverstone was still pretty hectic,” said Ricciardo when asked to compare it with this weekend’s experience.

“I think that not having the preparation that I’ve had at the start of this year probably made it a bit more intense.

“I’ve definitely had a lot of media attention in the last couple of days, but I think the on-track part was probably more intense in Silverstone.

“But I understand what Mark means about the attention here, it’s been pretty full on. Hopefully we can get out on track and do a good job over the weekend.”

Like many of his colleagues, Ricciardo says he is unsure on where his team sits in the 2012 pecking order following the four official pre-season tests in Spain.

“I think it’s hard to know where we are,” said Ricciardo.

“From what I’ve seen, the top teams are still going to be more or less than top teams, especially the top two or three.

“The midfield does seem a bit more tight. I think until Saturday qualifying or even Sunday’s race we won’t really know where we stand, but I think realistically we’re still in the group that we were last year, but it does seem like it’s closed up, so there’s probably more opportunity to leap-frog a few.”

The Formula 1 cars will hit the Albert Park circuit for Practice 1 at 1230 tomorrow.