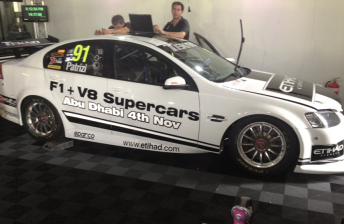 Michael Patrizi’s #91 Tekno Autosports Commodore VE will feature branding from Etihad Airways and the Yas Marina Circuit in a one-off partnership at the Australian Grand Prix this weekend.

Tekno has styled Patrizi’s Holden with Etihad Airways branding and key promotional messages.  Tekno’s Commercial Manager, Paul Robinson says that while the team has no major backers, this was an ideal way to mutally benefit all parties.

“This is an amazing opportunity to work with a global brand in Etihad Airways and to promote the Formula One Etihad Airways Abu Dhabi Grand Prix event to an international audience,” Robinson said.

“The Australian and Abu Dhabi Grand Prixs are the only two F1 championship events that are supported by V8 Supercars.  ”Race car branding is an engaging and effective way to communicate with the thousands of F1/V8 Supercars fans who will watch at Albert Park, as well as the millions that will watch on TV or online.”

The two-car Tekno Autosports team competed at the Clipsal 500 with no branding on its cars.

The second Tekno car of Jonathon Webb will run in Sargent Security colours this weekend, after the team has leased Paul Morris’s Development Series car due to damage sustained to his regular car at the Clipsal 500.