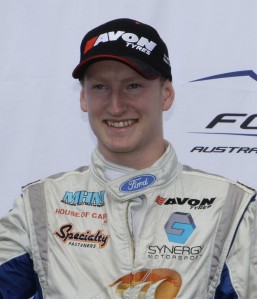 Synergy Motorsport’s Matthew Hart has taken pole position at Albert Park for the opening round of the 2012 Australian Formula Ford Championship.

Hart, who finished as the top rookie in the 2011 championship, led a Synergy 1-2 in the session, edging out team-mate Liam Sager by just 0.0176 of a second. Shae Davies will start third on the grid, ahead of Garry Jacobson, Jonathon Venter and CAMS Rising Star Jack LeBrocq, who set the pace in this morning’s 30-minute practice session.

“We made a couple of changes before qualifying and it worked extremely well, I couldn’t fault the car one bit. With my team-mate and I on the front row, it’s an awesome feeling – I can’t wait for Race 1 tomorrow.”

Like many of the young drivers in this weekend’s field, Hart is racing at Albert Park for the first time, having been a member of a pitcrew in Formula Ford’s last appearance in 2010. After his first day on track, he’s impressed.

“I love the track. It’s definitely one of my favourites now,” the 17-year-old said.

“The layout’s awesome, with the layout of the corners and the fine details of the track; you see each ripple strip with its own characteristics. It’s a world class facility and there’s a great atmosphere.”

The Formula Ford field will return to the track at 3:25pm tomorrow, Friday, for the first of three eight-lap races.

See below for the full Formula Ford qualifying result