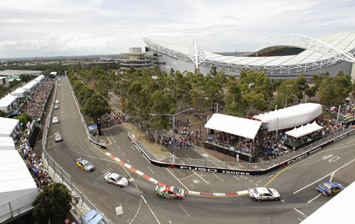 iEDM has been responsible for the design of several street circuits currently on the V8 Supercars calendar, including Reid Park (Townsville), Surfers Paradise and Sydney Olympic Park.

Tilke, the company of German designer Hermann Tilke, meanwhile has had a hand in developing over half of the circuits currently on the Formula 1 World Championship schedule.

It is expected that the partnership will provide iEDM with opportunities to undertake design work on future venues in the Asia Pacific region – an area into which the V8 Supercars Championship has long been eyeing expansion.

According to iEDM consultant and V8 Supercars Commission head Mark Skaife, work has already commenced under the partnership arrangement.

“This is terrific news, as it will allow both parties the opportunity to create interesting and challenging circuit layouts through their combined expertise and world renowned skill sets,” said Skaife of the partnership.

“Exciting projects underway in the Asia Pacific region will be announced shortly.”

Hermann Tilke, who is said to have instigated the partnership, has also spoken enthusiastically of the deal.

“No matter what the environment or location, I firmly believe that our shared strengths will enable us to reach further and deliver incredible results,” he said.

“I look forward with tremendous excitement towards new challenges which we will be able to reveal in the near future.”